These types of tests, each child is called and his test is taken. conclusions drawn through these tests are reliable.

The examiner is able to study the behavior of examinee subtlety and if needed, he can also personally give counseling to child by studying his mental and emotional merits and demerits.

There are two types of personal intelligence tests - verbal and nonverbal tests.

Non-verbal test are those exams in which some work is done only with paper and pencil. Like drawing pictures etc. There is no reading or writing etc. These are also called paper pencil tests (PPT). At present time, same test is taken fortnightly/weekly under the ongoing CCE program (Continuous and Comprehensive Evaluation) in government schools.

Children without educated can do it. Through this test of concrete intelligence is tested. In this test method, real objects are used and examinees are given some problematic tasks to do.

Such as completing the pictures by arranging scattered pieces of picture, telling the impossible things in given picture, completing figure by placing the pieces of triangular, square and round objects, giving the way out through the maze e.t.c.

Reading and understanding of language is essential in this test. It is in written form in any one language. Only those children can do these tests who are knowledgeable of that language.

The main purpose of this test is to find out how much knowledge a person has of reading and writing. He has to write the answers to questions by making circle, multiplication sign or underlining in front of it.

The credit of first successful attempt of individual intelligence test goes to Alfred Binet. He was a professor of psychology at University of Paris. Around 1900, administrators of primary schools in that town asked him for help in locating such children who were retarded so that they could be sent to specialized schools for education.

Binet took help in this work from his colleague, psychologist Simon. After several tests, both psychologists published their method of examination in 1905, which came to be known as Binet-Simon Intelligence Scale. He tried to make it complete by converting it in 1908 and again in 1911.

Burt in London and Professor Terman of Stanford University in America removed flaws in Binet test and gave it a new form known as Stanford Binet scale in 1916. He exonerated her completely in 1937 and again in 1960 with help of her colleague Merrill. This scale was for children aged 2 to 14 with  total of 90 questionnaires.

This exam is for boys age group of 3 to 14 years. maze are constructed in such way that they get progressively more complicated with age.

Child who is tested is given a pencil and a picture of a maze drawn on paper. the child has to mark the portion with a pencil marking the exit from it.

Wechsler Bellevue test was created in 1944 to test intelligence of individuals between ages of 10 and 60.

It consists five verbal and five actional tests. That is, this test is both verbal and non-verbal. It is widely used to test intelligence of adults. In this defects of calculating mental age have been removed.

Group intelligence tests started in America during First World War (1914-18). The reason was that government there wanted to appoint people to posts of soldiers, officers and other employees in army according to their mental ability.

Group tests of intelligence refer to tests that can be used on a large group of children at a time. In the past, they were administered in army, research, industry and schools. Often it is verbal.

Therefore, knowledge of language is necessary to answer them, but some tests are also non-verbal. In this form, group testing is also two types. Non-Verbal and verbal tests. Some group tests are as follows -

Army Alpha Intelligence Test was created in America during First World War to select soldiers and other military personnels and officers. It is used only for educated persons.

It was created in America during World War II to classify soldiers for different departments of the military.

This test is for 6 years age from adults. It has been particularly useful for taking an Intelligence test for children under age of 13.

Performance test means a test in which a person is given to do some work which he does with his own hands.

These exams are individual and non-verbal only. Language is not used in these. Language is used for information only. All information is given by signal. These tests are considered more reliable. Through analysis, the intelligence and ability of the child is tested.

These tests do not use language, so they can be administered to all types of children like illiterate, handicapped, dumb, deaf etc. It is especially useful for testing the intelligence of young children. Some of the major performance tests are as follows-

Bhatia battery test is the famous test in India. There are 5 tests under this - 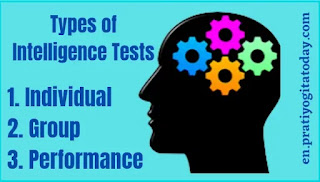 • Use of Intelligence Test in Education

The role of these tests in field of education is unquestionable, which can be seen as follows-

1. For information of individual differences.

2. For information of retarded children.

3. For classification of children.

6. For information about personality.

8. For guide the learning process.

9. Intelligence tests are useful in solving behavioral problems of children.

10. Intelligence can be used in awarding scholarships to students etc.

11. The use of intelligence tests is important for research work.

13. Intelligence test is also used to check validity of evaluation.

14. Intelligence test can be used at time of admission in school and also for admission in different classes.

15. Intelligence test can be used while selecting students for school educational activities.

Therefore, it can be said that the basis of whole learning process is intelligence. That is why intelligence tests have an important role in learning.

Gates and other scholars have rightly said, "Intelligence tests do not measure a person's overall ability, but they do estimate a very important aspect of him, which has a definite relationship with academic success and to some extent with most other areas. This is the reason that intelligence tests have become an important tool of education."

Q. 03. How many tests there under famous Bhatia Intelligence test in India?

Q. 04. What is role of intelligence tests in learning?

Ans : For information of retarded children.

For classification of children.

2. 8 Theories of Intelligence in Psychology