Main point of psychologists was that which mental abilities together determine nature of intelligence? Earlier it was recognized as gross power. After that Spearman presented his intellectual theory in 1904. following theory is valid regarding structure of intelligence -

Following are theory of intelligence and their exponents -

The first exponent of Uni-Factor Theory is Johnson. By the way, names of Alfred Binet, Terman and Stern are taken in its exponent. Alfred Binet developed pass model of intelligence in 1964.

He considered intelligence as a united and undivided unit. His opinion that various mental abilities of person work as a unit.

This view was proved untrue by various tests of abilities because if intelligence is made up of only one factor then one should have been intelligent in all areas, but it is not so.

Johnson believes that intelligence is a powerful mental process. She rules over all human beings. All other mental abilities are subordinate to it and this intelligence is made up of only one factor. Due to this tendency, it is also called absolutist theory.

Spearman is exponent of two-factor theory of intelligence. According to him, the structure of intellect is made up of two types of factors-

• General Factor - Spearman considered general ability to be more important than specific abilities. General ability is found in all human beings in more or less quantity. Its main features are as follows-

1. This ability is innate.

2. It always remains the same.

3. It is used in all mental works.

4. It is in every person different.

5. The more then general factors is in the individual, the more he achieves good success in every field.

6. A person has only one general factor.

According to Spearman, specific factor is related to specific actions of individual. It is acquired, not congenital. It is found in different amounts in different people.

Spearman corrected his above theory after 7 years in 1911 and said that instead of two factors in intelligence there are three factor. Spearman said that along with a common factor and a specific element, there is also a group factor. This is Spearman's Three Factor Theory.

Spearman gave place to such abilities in collective factor which, being superior to general ability and inferior to specific ability, occupy a place between them.

Thorndike his theory of intelligence based on stimulus response theory (S-R theory). In his view intelligence is sum total of all those mental capacities which participate in activities of brain and are independent and separate in themselves. In this form, level of intelligence of a person is based on innumerable bonds between brains.

Thorndike postulated that if one person is more intelligent than another, it is because the number of suitable nerve bonds in his brain is greater than that of a person who is less intelligent than him.

Thorndike has given four characteristics of intelligence -

1. Level - difficulty of any work

2. Range - How many types of work can a person achieve success?

3. Area - How many difficult and more problems a person can find solutions.

4. Speed - How quickly any person can solve any problem.

In conclusion, it can be said that according to Thorndike, intelligence is not only sum of these two factors – general ability and specific ability, but it is collective form of innumerable sums of specific Stimulus and related specific responses.

According to Thurstan, mental activities may be numerous, but they are not all distinct and specific from each other. Some of them may have more similarity and be placed in a class. All these mental activities can be divided into some specific classes.

According to Thurston, the primary mental abilities present in intelligence

According to this theory, mental abilities of a person are classified into three dimensions -

Three dimensions of intelligence are divided into groups of mental abilities. like-

2. There are 5 dimensions under contents - visual, auditory, symbolic, semantic, behavioral.

3. There are 6 dimensions under product - units, classes, relations, systems, transformations, and implications.

It is also called theory of formation of intelligence.

Hierarchical theory of intelligence has been propounded by Burt and Vernon. In this theory, each mental ability has been given a hierarchical order.

In this, first comes general mental ability, which is divided into two major sections, out of which verbal, numerical and educational abilities come in first section.

In second section, practical, functional, mechanical, spatial and physical abilities come. Both these major and important factors can be divided into many minor factors. 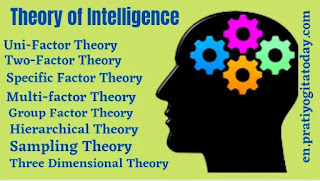 Sampling theory of intelligence was propounded by Thomson. According to his opinion, a person has many abilities, but when he performs a work, he takes a sampling from all abilities in performance of that work and creates a new ability for that  special work.

Q. 02. How many factors are included in Guilford's three-dimensional theory of intelligence?

Q. 03. Who exponent the multifactor theory of intelligence?

Q. 04. Who introduced the triarchic theory of intelligence?

Q. 05. Who introduced the hierarchical theory theory of intelligence?

Q. 06. Who gave the concept of primary mental ability?

1. Intelligence : Meaning And Definitions, characteristics and types of intelligence