History of Intelligence Test In India

This effort was commendable enough, but there were some defects in this test, which in 1935, Shri V V Kamath of Mumbai tried to remove it. Shri Kamath made 'Mumbai Karnataka Revision of Binet Test' in Marathi and Kannada language.

Pandit Lajja Shankar Jha certified simple mental test in 1922. Its certification was done on 1000 children. This test was for children aged 10 to 18 years.

In 1960, Dr. M.C. Joshi designed a 100 steps 'General Mental Ability Test' which was verified on 7830 students. In 1964, Dr. Prayag Mehta made a 'Group Intelligence Test' verifying on 1800 children. At the same time Dr. Jalota revised his simple mental ability test.

The above efforts were only in direction of measuring intelligence of children up to adolescence, but in 1964, Mr. Mazumdar of Kolkata adapted Weschler-Valevue intelligence test in Bengali language.

Apart from Indianization of said examinations, some scholars also made their fundamental drawings. In 1938, Manziel created a basic nonverbal test. Similarly, in 1942, Vickery and Drever made a similar test. Sri Ramnath Kundu of Calcutta University created a nonverbal test for adults. 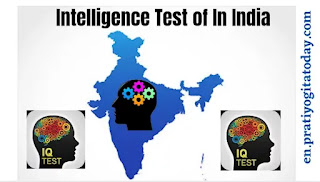 Indianization and certifications of following performance intelligence tests has taken place in India.

* Goddard Farm Board - Patel and Panwala in Gujarati.

Apart from this, Shri Chandramohan Bhatia and psychology school, Allahabad have also done many works in this direction.

In this test, the person or subject is asked to draw the figure of a human being, on the basis of which his intelligence is measured.

2. 8 Theories of Intelligence in Psychology