• Principles of Child Growth and Development

Growth and development of child is according to certain rules. Changes in growth are quantitative which can be measured or weighed, but development refers to all changes in body, especially changes in shape and size.

Gasel says, “Though no two persons are alike, the order of development is the same in all normal children.”

The sequence of development of all children after pregnancy or birth is from head to foot.

2. Principle of General to Specific Response

This means that in all areas of child's development, first there is a general reaction, then there is a specific reaction. For example : First time child uses all parts of his hands, feet, head etc to hold an object. Afterwards there is a reaction from the concerned organ only i.e. only the hand moves.

The process of development of the child sustainable continuously from pregnancy to old age, but pace of development is not always the same. Sometimes fast, sometimes slow.

According to Skinner, "The principle of continuity of development processes merely emphasizes the fact that no change in the individual is accidental."

The various parts of a child are related to each other. The proportion in which one parts is developing, the other parts develop in the same proportion.

For example, along with mental development of a child with sharp intelligence, speed of physical and social development is also fast, but all parts of the body do not develop at same pace. There is variation in pace of development.

For example, by the age of 6, the brain becomes fully developed, while hands, feet, nose and mouth, etc., are attained in adolescence. The theory of different speeds of development was given by Douglas and Holland.

That is, first the central part of the body develops, after that knees, hands, feet and fingers develop. Similarly it is also important that first response takes place in brain. After that other organs start doing their work.

6. Principle of Unity And Variation

This principle means that in beginning the behavior of child is normal, later on they become specific. That is, growth and development proceed from general to specific. This rule works in development of language of child.

1. child learns gradually through continuous learning process. Therefore, according to growth and development, presentation of the content should be done gradually. child will not be able to grasp a subject matter all of a sudden.

2. The educational implication of Principle of pace of development is that in syllabus, emphasis should be laid on the arrangement of individualized teaching in subject matter, that is, on the basis of age of child, efforts should be made to acquire knowledge according to his ability.

4. The teacher should first analyze subject matter and then synthesize it. The principle of whole to part ​should be adopted

5. According to principles of development, teachers first give knowledge of general things to students, then specific things related to them can be told.

6. The educational implications of growth and development also mean that both heredity and environment should be taken into account for proper development of child.

it can be said that knowledge of principles of growth and development makes the teacher aware of fact that at what age what can be expected from child.

Knowledge of the principles of growth and development tells the teacher when and what type of behavior can be expected from  child. Also, with its knowledge, an environment conducive to right development of children can be created.

If teacher is ignorant of these rules, then in such a situation he does not treat children appropriately, due to which inferiority can arise in them. Tension and conflict may arise in them.

Therefore, knowledge of laws of growth and development is necessary for teacher so that he can behave properly with children.

• Different Stages of Growth and Development

I. Prenatal stage : from conception to birth.

(1) Growth and Development in the Prenatal Stage

Prenatal development is not only very rapid but also systematic and predictable. prenatal period is often divided into three stages. Each has its own form of development. It has three stages -

I. Germinal Period, which lasts from conception to end of second week.

III. Fetus Period, which lasts from end of second month to time of birth.

I. Cephalocaudal Development - This means that growth and development takes place from head to feet. That is, first there is an increase in parts near head, after that organs below it grow.

II. Proximodistal Development - This means that there is growth and development in middle part first and then moves on to other parts.

(2)  Growth and Development in Infancy

When the umbilical cord is cut, baby adjusts to new environment outside mother's body, from then neonatal stage started .

In this stage, child develops feelings of cold, hot, pleasure, pain etc. Mental development is not much, yet the ability to think is developed. child does not have control over emotions and there is a feeling of insecurity in him. At first he is dependent on others but later he starts expressing desire to be independent.

There is a lack of moral development. His actions are more influenced by basic tendencies. From point of view of growth comes muscle control, control of the part of torso, control in hands etc. Catching toys, throwing etc. doing action. 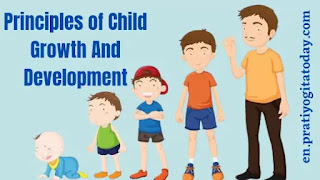 (3) Childhood Growth and Development 6 to 12 years

In this stage, child attains physical and mental stability. Builds harmony with environment. His interest in outside world increases. He turns out to be an extrovert. He has curiosity about everything. There is a sense of permanence in every area.

Growth and development have taken place sufficiently by this age. Muscular control is complete. At this time the growth is uniform. The average length is 4.5 inches by the age of 6. Physical growth becomes slower than before.

1. Growth and Development of Child