Jerome Bruner was an American psychologist and proposed a new learning theory on cognitive development.

According to Bruner, man tries to learn as much as possible those things which are real or are very close to reality. In order to recognize reality man has to go through three situations -

According to this principle of Bruner, any person should be made aware of the structure of knowledge, because once that person learns the structure, he does not make any kind of error in future.

If the child has to get the knowledge of computer, then the child should get the learning done by explaining the manufacturing process of all the computer equipments.

The word structural refers to the construction of knowledge by the learner for himself.

According to Bruner, children should be taught in such a way that they can construct their own knowledge. Children should be made aware of the basic nature and structure of whatever subject matter is taught. Because by doing this -

2. The child learns with interest.

3. Such knowledge is permanent.

4. Such knowledge helps in learning transfer.

Bruner has emphasized the importance of classify learning and said that when the child understands the basic structure, the understanding of any subject is better.

According to Bruner, understand and to think is to classify. The best stimulus for learning is described by Bruner as 'interest in the subject'.

• Stages of Cognitive Development According to Jerome Bruner

The child interacts with physical objects and learns from its effects. In this stage the child tries to learn or take cognizance by doing action. For example, running hands and feet, cycling etc.

The importance of mental response or language is negligible in this stage. To understand an object, he grabs it, plays with it, twists it, bites, breaks it, cries when hungry, etc.

Through these activities the child establishes a relationship with the external environment.

This is a state of physiological responses. In this stage, the student tries to acquire the knowledge of the environment through his motor activities and sports activities.

In this stage the information reaches the individual through mental reflection. In this, the child learns through perception. The child is impressed by the variety of loud sounds and flashes. Visual memory develops in the child.

In this stage child learns takes place with the help of patterns and pictures. Bruner's this state is similar to Piaget's pre-operational stage.

At this stage the child develops the ability to think abstractly. Children learn language, maths, reasoning etc. and use them. The use of cues increases the cognitive ability of children.

Bruner says that children initially contemplate through actions, then contemplation through reflection and later through signs or words. In this stage the child expresses his feelings through phonetic signs (language). This is a state of abstract thinking.

Based on these three stages, Bruner proposed a mixture of concrete, illustration and symbolic activities for effective learning.

Bruner believes that learning in children should begin with direct contact with objects. This is followed by visual learning and lastly the development of understanding with signs or symbols.

• Application of Bruner's Theory in Teaching and Learning

1. According to Bruner such conditions should be created in front of the learner so that the learner can be motivated to act completely on his own.

2. Emphasis on understanding the process used to acquire knowledge rather than attainment of knowledge. Children should also be inculcated that knowledge is a process, not a result.

• Exploratory learning - Bruner has a significant contribution in proposing exploratory learning. In this, learners actively make meaning of structures and identify the theory on their own. Thus the learner himself learns by searching concepts and principles.

The teacher has no role in this type of learning. The student learns through research by being active himself. The role of the teacher is to create such a situation in the students, in which students can build maximum knowledge. This method is very good for subjects like science, history, geography etc.

4. Curriculum - Bruner introduced the spiral curriculum, which means readiness to learn and build a concept in depth according to one's own cognitive capacity.

Bruner believed that the curriculum should promote the development of problem solving skills through exploration and discovery.

The subject matter should represent the way the child sees the world. Bruner laid great emphasis on teaching through the arrangement of concepts and learning to be done through discovery.

The National Curriculum Framework (NCF-2005) also emphasizes on the formation of knowledge by the child, which has been discussed by Bruner. Children build their new ideas on the basis of their existing knowledge.

5. Jerome Bruner, in his theory of cognitive development, has put the following four requirements for making the learning process effective and interesting through teachers -

1. To prepare students for learning.

3. To make systematic presentation of the subject or learning material.

Bruner theory of learning has primarily given priority to the development of students' abilities and capabilities for independent study, work and action, research and problem solving.

According to Jerome Bruner, “Children form the ‘Social Construction’ of their understanding. The environment and context have a profound effect. If children are told to establish their mental level and meaningful, then they can understand even complex things.”

That is, working in group, taking into account the age and context of the children and making them meaningful can make our job easier.

* Similarities between Piaget and Bruner's theory of cognitive development

1. The student learns on the basis of previous adaptations.

2. The child naturally has curiosity about language.

4. Children learn by actively participating in the learning processes.

5. The last stage of cognitive development extends to the acquisition of symbols/signs and is given prominence. 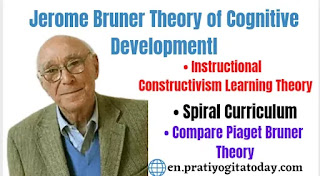 * Difference between Piaget and Bruner's theory of cognitive development

1. Bruner considers development to be a continuous process while Piaget considers a series of different stages.

4. Bruner attaches importance to the participation of adults and peers with more knowledge in the learning process (as Vygotsky gives) whereas Piaget does not accept this.

5. According to Bruner, the representations of the previously adopted stage of iconic thinking do not change, whereas according to Piaget they change.