• What do you understand social learning

Human beings learn something or other through their environment. It is well known that man is a social creature. He lives within society, learns from society, teaches society. Bandura has called social-guided learning as social learning.

According to Bandura, that element is learned under social learning, in which elements which reward, which have reputation or those who are deserving. Those elements are not learned, which are not established or which are not worthy, that is, some elements are determined by the society, which the child automatically follows and that becomes his learning goal.

Many times it is also seen that a person is ready to give up the learning done by himself. Sometimes he tries to adjust to situation on basis of his experiences.

• What is Albert Bandura's Social Learning

Albert Bandura has written his thoughts about social learning in the following lines, "The models that are more imitated are those who are rewarding, who have a high reputation in society or who have control over the sources of reward. Models that lack above characteristics are relatively less learned.

Observation is the mainstay of learning moral behavior in children. This is called Bandura's theory of behavior modification through modeling.

The principles of learning propounded by many psychologists have often tried to explain the process of learning by experimenting on animals. But teachers began to express doubts in classroom situation and in applying the results of experiments on animals to the child.

Educationists believe that the child learns behavior through interaction. The interaction can be with an individual or a group. Even more important is condition in which behavior learned at time of interaction is confirmed. To solve these problems, studies were started by psychologists.

Learning by imitation is more prevalent in social life. Seeing the behavior of a model, the child imitates it and tries to identify with it. That is, imitative learning is adoption of new responses acquired from observation of a specific behavior performed by a model.

Such exemplary models for children are more meaningful for adults according to Albert Bandura.

Reinforcement can be positive or negative. child learns behavior after receiving positive affirmations from people and discards that behavior when people are negative about a behavior.

• A Brief Introduction of Albert Bandura

Albert Bandura worked on social learning was born on 4 December 1925 in Albert Region Canada. He has been teaching at Stanford University since 1953. Recently on 28 July 2021, 85-year-old Canadian psychologist Albert Bandura passed away.

He has elaborated this principle in his 1986 book 'Social Foundations of Thought & Action'.

According to Bandura, behavior is acquired by observing the behavior of others. Motivation factor and self-control system are responsible for behavior of the person. He was awarded the Thorndike "Award for Distinguished Contributions of Psychology to Education" for his remarkable work in the field of social learning.

Bandura has done many experiments. We come across many models in people's lives every day and imitate their behaviours. The same situation arises in front of child.

A child sees the hero's actions in a movie shown and stores his behavior in his mind. The child sees other people there also praising his behavior. child behaves same way in front of his parents when he reaches home.

In 1963, Bandura put two conditions in his study -

Bandura has briefly written about characteristics of model that behavior of those models who are respectable, can reward, deserve or have a high standard, are quickly imitated. Often teachers and parents exert more influence on the child's imitative behavior.

According to Lindgren, “The process of social learning begins through contact”.

Lindgren has pointed out that social learning begins with contact.

Cgcord and Backman have written about social learning, "A more general form of social learning is role learning. In which one person is able to interact with other individuals who have a similar role position. learns to behave and see alike."

From the definitions given by Bandura, Cgcord and Backman, it can be determined that the child Can change his behavior according to other children. adopts it in his life. That is, adoption of  prescribed behaviors of society by the child and abandonment of unusual behaviors is called social learning.

adoption of new responses acquired from the observation of a specific behavior performed by a model is called imitative learning. According to Albert Bandura's theory, behavior enhances the experience of individuals.

Elements like inspection, measurement and change were given place through its application methods. In this social learning process, by changing one element, its effect was seen on other element.

He did many experiments for social learning theory, such as in one experiment, some children were shown a film in which the behavior of an adult person was displayed. film consists of three parts, first film shown to selected children in which protagonist of the film behaves aggressively and is also punished for such behavior. 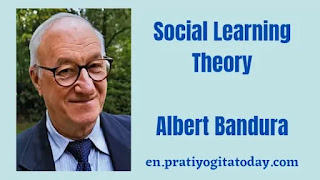 In second film also actor behaves aggressively, but in this the hero is rewarded. Similarly in third film the protagonist is neither rewarded nor punished for aggressive behavior.

After showing these three types of films, Bandura kept the boys in the same situation. Observed children by placing them in different types of situations and found that children had relatively less imitation of behavior which was related to aggressive behavior and punishment of child.

In this way children behave through interactions. interaction can be both individually and collectively. Early learning can be done by imitating in social life.

That is, imitative learning or social learning is adoption of new responses acquired from observation of a specific behavior done by another person.