Lev Vygotsky (1896–1934) was a Russian psychologist. He did major work on developmental psychology in the field of psychology. Vygotsky did more work on cognitive development, especially on language and thought.

According to Vygotsky, language is a major symbolic tool given by society, which is particularly important in the development of the child. Vygotsky, "Our own development done by others."

According to Vygotsky, cognitive development is influenced by social factors (family, society, school, friend-circle environment) and language. Culture and language play an important role in development.

Hence this theory is also known as socio-cultural theory. According to this theory, cognitive development occurs through an 'inter-personal social situation' (interaction with skilled and learned persons).

According to Vygotsky, the development of the child acquires knowledge through society, that is, through social interaction. The child learns through interaction with adults and equiadults.

According to Vygotsky, a child's learning cannot be separated from their social context. Vygotsky regards learning as a social activity. His theory lays more emphasis on the cultural, social and linguistic aspects of development.

Vygotsky emphasizing on the importance of games and said that games play an important role in the cognitive, emotional and social development of the child.

This is the reason that along with education, adequate attention is paid to sports in schools. Therefore, Lev Vygotsky has considered social interaction as the main cause of cognitive development of the child.

7. Vygotsky's theory of cognitive development in the Hindi language

Internalisation : The development that takes place from outside (the environment) to the inside (internal of the child) is called internalization by Vygotsky. Man learns by assimilating within himself the observation of the external environment.

Language Machine : Transfers the properties of language from one culture to another through social interaction. (Attributes of language - feelings, thoughts, skills, knowledge, morals)

For example, a person is a resident of Punjab, who resides in Gujarat for some work and people from Rajasthan, Gujarat and Maharashtra are also residing in their neighborhood.

When we interact with our neighbors, we get to know about their language, culture, lifestyle, food, customs etc.

Language transfer : by simulation, by instruction, by classmates.

Scaffolding : Scaffolding is a concept related to potential area of ​​development. According to Vygotsky, communication is an important tool for Scaffolding. The Scaffolding work is temporary.

Because when the child first needs the help of his teacher, classmates or parents in any task or acquisition of knowledge, and later the need for help ends up being less.

Language and thought : According to Vygotsky, children use language not only to communicate but also to plan, instruct and evaluate their behavior to act in a self-directed manner.

The use of language in self-direction is called internal self-language or private language. Piaget considered personal language to be self-centred, but according to Vygotsky it is an important tool of the child's thoughts in early childhood.

Therefore Vygotsky emphasizes on accepting social interaction as a fundamental part of the cognitive development of children. They believe that the community serves as a central role in the process of knowledge creation.

According to Vygotsky, the social interaction process of learning attempts to move children from the level of actual development (without help) to the level of potential development (capable of doing a task with help).Vygotsky has called it the Zone of Proximal Development.

Vygotsky has pointed out that social-directed interaction plays an important role in the formation of any kind of new knowledge or learning a new language. His theory has also been supported by Jerome Brunner. According to him, the environment of the child and the people around him are helpful in his language development.

He saw language as a psychological tool and told that through this the child develops his understanding of anything and the mature and skilled people around him help him in this learning process.

When children engage in interactive activities with adults and peers, they assimilate those conversations. which he later uses as internal dialogue to guide his own thought.

Example : A child listens attentively to the instruction given by his mother while doing a task and later when he starts doing such a task independently, then follows those instructions. Vygotsky has described the zone of proximal development in his theory.

• Zone of Proximal Development : What is ZPD ?

According to Lev Vygotsky, “Children have a proximal zone of learning. Children engage and learn better when given a task that is slightly more difficult than their present level.”

It tells us that we should use the challenge to engage the children and it is neither too difficult nor too easy.

It is an important concept, which tells what a child can be able to achieve at his own level and with the help and guidance of other skilled persons. The area between what the child is doing and what the child is capable of doing is called the zone of potential development.

That is, the area of ​​potential development is the difference between what the child can do independently and what can be done with assistance. Whereas where children do their work without any help, then it is called the area of ​​real development. 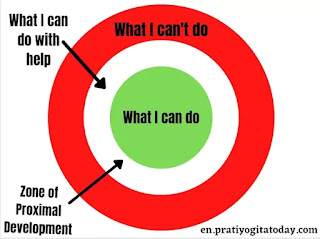 For example, suppose a child finds it difficult to build a sentence structure based on grammatical rules at a particular point in the language, but is able to do it easily when he gets the help of a skilled person. Vygotsky has termed this as scaffolding.

Scaffolding refers to the various instructional techniques used in the learning process to provide progressive higher understanding and ultimately special experiences in children.

According to Lev Vygotsky, that task which is too difficult for the child to do on his own but is possible to do with the help of an adult and more skilled partner.

In this process, the teacher provides immediate assistance to the students from a gradual level, which helps in developing a higher level of understanding and skills in the children. It also helps in reducing the problem and learning gap in children.

When the child establishes contact with an object or person and performs other self-controlled activities, then all his activities become related to each other, which in a way is called mental representation of task achievement.

"Communication with others is an important factor in a child's language development."

Vygotsky sees social interaction as a responsible factor for language development. According to him, when contact is established through a meaningful conversational process, then language development gets special help. He considered language as an important tool for establishing contact with the outside world.

According to Vygotsky, language has two important roles in the cognitive development of children :

First, it enables a person to transfer all the information to the children.

Second, language itself is a very powerful means of intellectual assimilation.

1. Social Speech : Social speech is the act of communicating with others to establish external contact.

This occurs from birth to the age of 2 years and is also called external speech.

2. Internal Speech : This transfer takes place between 3 to 7 years. In this, children learn to talk among themselves and after that self-talk becomes the nature of children, then they develop the ability to do many things without speaking clearly. Self-talk has been considered the foundation of cognitive development.

3. Inner Speech : Self-talk helps children in self-direction. Children speak to themselves to give direction to their work.

As children grow up, this self-talk of theirs gets internalized and transformed into internal speech, which is reflected in the form of reflection in the later stage.

Piaget called this conversation immature and self-centered speech. Vygotsky has also believed that children who do more self-talk are more socially efficient than others. Children also use it to perform higher level activities.

Vygotsky is the first psychologist to acknowledge the positive role of children's self-talk. The term 'private language' was first used by Lev Vygotsky. It is probably for these reasons that Vygotsky is also known as the expander of Piaget's theory.

• How Vygotsky Theory is Different from Piaget Theory

Deference between vygotsky and piyage theory

The main difference between Piaget's and Vygotsky's theories of development is that from the point of view of language and thought.

In contrast, Piaget's theory plays a leading role in learning biologicality and development.

According to Vygotsky's theory, learning and development are mediated by the cultural and social environment.

4. According to Vygotsky, learning first takes place between the child and the adult who is more knowledgeable. The process of knowing through interaction and cooperation with others is qualitatively superior.

Therefore, they emphasize that the nature of cognitive development is social and not cognitive, as Jean Piaget believed.

According to Vygotsky, language acquisition requires not only the emphasis on words, but the need for an interaction based on language and ideas. Teachers can improve their linguistic level by understanding the point of view of the children.

Vygotsky says that children themselves construct knowledge through social experience and in this situation mature and experienced persons guide and help them.

This idea of ​​Vygotsky has a far-reaching impact on second language studies and research, with a great deal of emphasis on social interactions in cultural, historical and social perspectives.

Although Vygotsky does not directly comment on second language acquisition, he has defined it by analyzing the ability of humans to make connections with language learning.

Vygotsky has also pointed out that keeping in view the individual variation of the children, their active participation in the classroom should be ensured. 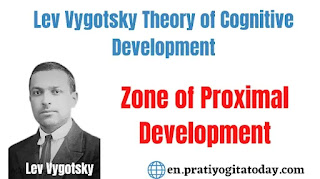 They should be provided such a problem so that they can empower the area of ​​proximal development with the help of their peers and teachers.

By doing this, they will also be aware of self-discipline. Teachers in the classroom should form associate learning groups in which mutual problem-solving method can help in developing high cognitive thinking.

Classification of Model of Teaching